Katerina always had passion for art from childhood.  In 2013 she trained with LONG TIME LINER in Munich and got her first diploma in Permanent Make up for of pre-drawing. One week after she got her LONG TIME LINER diploma Licence I. “Permanent make up is her dream, her life  and the most her passion”

October 2013
Katerina went to learn to Poland. After a long, hard week of training she has been certified and recieved the title ELITE in permanent make up with LONG TIME LINER. Since than she is now recognised as an Elite permanent make up artist in UK

April 2014
Travelled to HONG KONG to train in the most invasive technique in permanent make up called Microblading with a hand tool known as embroidery or soft touch with international trainer Rebecca Chung.

July 2014
Katerina brought the new invasive technique called microblading also known as embroidery or soft touch to the UK as first person and organised the first unique masterclass in Hereford for qualified technicians to learn this amazing skill.

In the same week she also learned new technique FLUFFY EYEBROWS from Natalyia Yeremenko from Estonia.

One of the judges for international championship 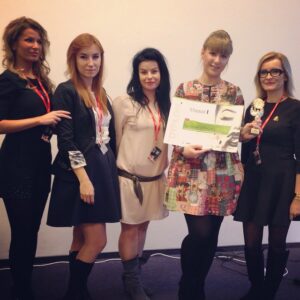 After a lot of research and hard work, Katerina had her own micro needles manufactured in Korea for microblading (embroidery) and is the first main supplier in UK.

one of 4 main speakers at microblading conference in Amsterdam